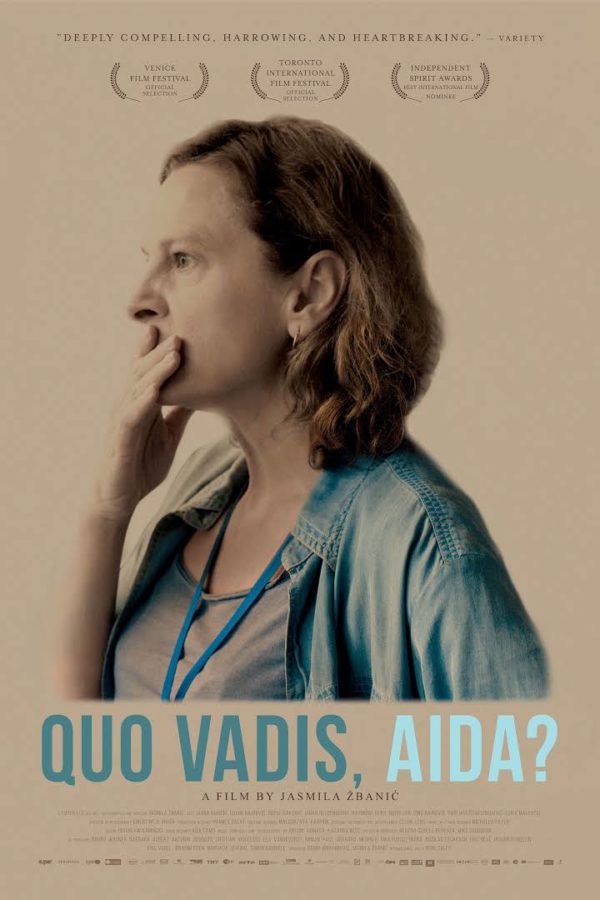 Quo Vadis Aida has been nominated for an Oscar for Best International Feature Film.

*Disclaimer*
Before you begin to read my article I would like for you to understand that I have a bias when it comes to the topic of the War in Bosnia. I am a Bosniak, members of my family were either killed or seriously traumatized by the war, and I grew up in a post-war Bosnia which still exhibits tensions that are leftover from the war. I shall try my best to review this movie in the most objective way possible without letting my own personal attitudes or opinions shape the article. Thank you for understanding.

VRS: Vojska Republike Srpske; Army of the Republika Srpska
Army BIH: Army of Bosna i Hercegovina; The army of Bosnia and Herzegovina

Quo Vadis Aida is a movie by Bosnian film director Jasmila Zbanic following the story of a Bosnian United Nations interpreter, Aida, during the time of the Srebrenica massacre. For context-Bosnia and Herzegovina during the 1990s was locked in an ethnic and sectarian war between its three peoples: Bosnian(muslims), Serbs(Orthodox), and Croats(Catholics). By 1995, the war in Bosnia had been on-going for three years with no end in sight. The north-eastern town of Srebrenica had been declared a United Nations safe zone which meant that the town was under protection by the United Nations Protection Force (UNPROFOR) from any attacks from any army. Many men, women, and children flocked to the town for safety from the violent conflict because of this resolution.
The movie is no typical war movie as its story is told with great restraint and pacing, I would compare it to Dunkirk, as the two movies share a gripping storyline with suspense that keeps you on the edge of your seat without using cheap shots of gore and blood. The story, although predictable, is a story of survival and choices as Aida tries to survive in a worsening situation and she grapples with many inner conflicts that challenge who she is: Is she an unbiased UN representative who does not interfere in the conflict or is she a Bosnian woman who cares about her people and wants to save them. At first, Aida tries to use her position to convince UN officials that negotiation with the VRS is futile as they will just kill her people.

The movie supports an excellent cast each of which giving it their best in their roles. The actor that plays Aida, Jasna Duricic, keeps you at the edge of your seat as she struggles to find a way to save her people and her family. Her emotions and stress feel so real as she tries to make sense of an unbelievable and impossible situation. Another role I would like to highlight is Boris Isakovic, who plays Ratko Mladic, the historic commander of VRS forces. He is able to show the audience his true intentions by masking it in meaningless talk. Throughout the film, Mladic walks around acting and informing others that he is here to save the people of Srebrenica. He hands out food and drinks and has a cameraman to record the entire thing. As an audience member, you are not easily deceived as you have ample evidence that he is simply buying trust and time before he reveals his true plan. Along with this, Isakovic also doesn’t make the intentions of his character blatantly obvious as in moments of high tension, he does “kind and generous” things in order to keep a sense of unease among the rest of the characters and the audience.

The movie is full of deeper meanings as the main focus of the film is to educate audiences about the tragedy at Srebrenica, but also give a warning that such an event is still possible. The movie portrays the situation in Srebrenica as futile from the moment the VRS stormed the town and captured it. There is nothing that could’ve been done to stop the massacres and the characters do not find that out until the killing begins.Aida knows what is coming for her people and her family, and her motherly stubbornness is the only thing that keeps her from giving into reality. I believe the most powerful scene in the entire movie is when Aida and a crowd of other moms are walking in an eerily silent facility with the bones and clothes of victims of the genocide. The women pace around the facility in silence, looking down at the organized bones trying to identify their loved ones. How the scene is shot makes it look as all these women are in the middle of a gallery walk at an art exhibit, which makes the scene even more shocking. Aida eventually comes to find both her sons and her husband’s bones by simply identifying them by the clothing that was recovered with the bones.

The movie also takes a critical look at the United Nations as viewers begin to see that the UN safe zone mandate is a bluff that the VRS has noticed. The movie hints that the United Nations bears as much responsibility for the deaths of innocents as those who have perpetrated those crimes. Although taking a critical stance against the UN, the movie also shows the uselessness of the Dutch peacekeepers on the ground. Each and every one of them wants to help and wants to see the bloodshed come to an end, but their hands are tied behind their back by global politics. No more clearer is this than in the character of Colonel Karamans. He is the Colonel in charge of the UN base in Srebrenica and is essentially in charge of the protection of almost 40,000 people. At the beginning of the film, he is confident that the UN will deliver on its promise of airstrikes against VRS positions, but as the movie drags on and his superiors continuously encourage him to appease VRS commanders. He too becomes disillusioned with the idea of the “Srebrenica Safe Zone.” He knows that his tiny garrison of 100 infantry could not stand up to close to 2,000 soldiers plus tanks and artillery of the VRS. As the situation becomes more hopeless, Karamans retires to his office and is never seen for the rest of the movie as he too realizes that the safe zone mandate is a bluff. I personally believe that Johan Heldenbergh, who played Karamans, gave the best supporting role in this film.

By the end of the movie, the audience realizes the real meaning of the title Quo Vadis Aida. Quo Vadis Aida is Latin for “where are you marching Aida?” Throughout the film we see Aida running around the United Nations compound trying to solve a terrible and unfortunate situation by any means. First, she is running around to try to save as many people and then she is running around attempting to save her own family. The title asks why is she doing this? Why is she running everywhere? This title has its own tragedy as all her attempts to save her people and her family prove unsuccessful and thus implying that all her physical and mental exercise is pointless as the fate of these people was sealed from the beginning. Thus the title asks why is she doing this when they were doomed from the beginning?

The ending of the movie is an elementary school play staged by Aida in which her students cover and uncover their eyes with their hands as if they were playing peekaboo. In the audience sits many former members of the VRS who perpetrated the massacres, earlier in the film, and are now watching their children perform in the very same school they used to murder Aida’s two sons and husband. The covering and uncovering of the eyes by children is a dark symbol of the continued denial of the genocide in Srebrenica and the denial of all genocides. Zbanic hopes with this final scene to teach us that we cannot cover our eyes in the face of tragedy because then we are doomed to repeat it.

The women and young children of Srebrenica were put on busses and sent towards the BIH army control area while the men and boys were loaded onto trucks, shot dead, and buried in unmarked mass graves. It is not known how many men died at Srebrenica, the current number stands at 8,372 but it is estimated that more than 1,000 bodies are still missing. It is an understatement to say that the Bosnian war was a pointless tragedy for all those involved.

If you wish to read more about the war I highly recommend these sources:
Origins of a catastrophe
Sarajevo Marlboro
Bosnia: A short history
To end a war
Wikipedia page for the Bosnian War