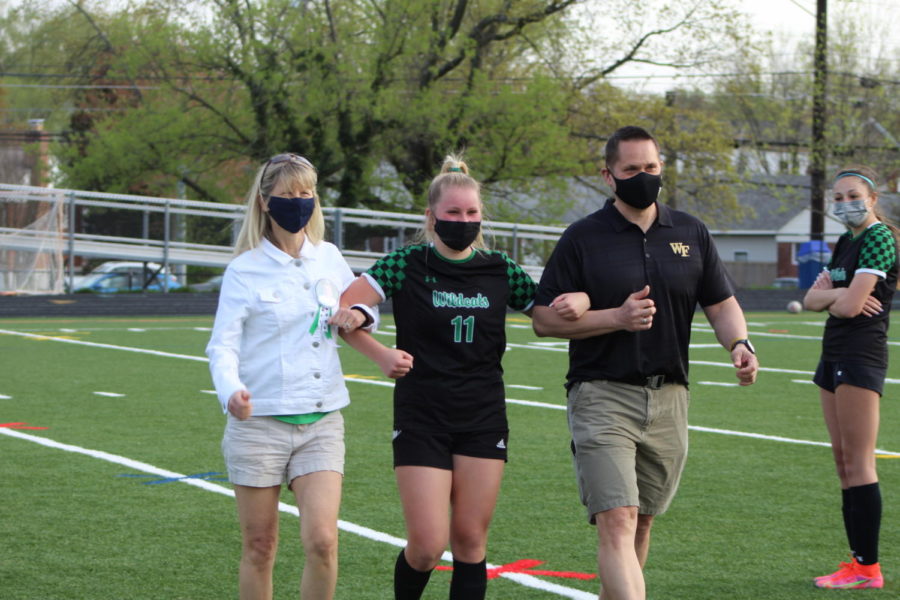 In a year largely devoid of traditions, April 8 hosted an event that seems almost prehistoric: senior night. In typical Covid fashion, the event was not what many expected; girls’ soccer, a sport that formerly occurred in the fall, celebrated their senior night weeks into Spring. However, seniors Courtney Schneider, Abby Matson, Danielle Nevett and Lizzy Mayo were still able to enjoy some of the traditional aspects. Each senior walked elbow-in-elbow with their parents down the midline on the soccer field, eventually greeting Mrs. Baker and coaching staff. Instead of a hug or a handshake, these seniors were met with elbow touches.

“I had the time for the game wrong in my calendar (7:15 instead of 5:30) so at 4:57 I got a call from Courtney asking where I was– and I was at work. I ended up getting there in the nick of time with my uniform barely thrown on. Later in the first half, I took a header where I ended up colliding with one of the other team’s players and I started developing a black eye, just in time for the ceremony and senior pictures. While neither of these things were ideal, they are the perfect summation of how my soccer career went. That’s most of what I was thinking during the ceremony, that I was just happy we even got a senior night, even if it didn’t look quite the same as I thought it would,” Matson said

Regardless of the way things have gone for the past year, Schneider felt that her senior night made things seem normal for the first time in a while.

“It was fun actually seeing people in the stands and there was more energy than ever before (in this season). It was really fun being able to do the same walk down the field with our parents, through a tunnel of our teammates just like seniors from every year before,” Schneider said.

Mayo also loved being able to get the sense of normality she had been hoping for throughout her senior year. Senior night gave her something that could look forward to and also something that she could remember for a long time.

“Everything had gotten messed up in some way, so I really wanted something that I could look forward to doing and being with my teammates and family,” Mayo said.

To Nevett, getting this senior night reminded her of the notable influence she had to have on the team this year.

“Our team has a lot of underclassmen and only 4 seniors, so it’s been really special to take on a bigger leadership role this season,” Nevett said.