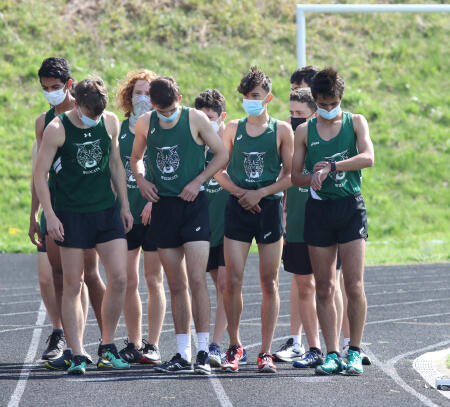 The team lines up in preparation for their race. Alex Scott (far left) and Adam Morad (far right) have been stand outs this season, consistently performing well in their meets.

Spring sports are underway and for the first time in a long time, many WJ athletes are getting a sense of normalcy. Back into their routines, athletes have been training and participating in competitive matches, games or meets with other schools in the county. After not competing for a year, the Cross Country team at WJ is looking to dominate in this unusual season, but most important of all, the runners are just happy to represent their school once again.

Although this season has meant limited meets and limited opponents, the runners have still been able to practice just by running around their neighborhood by themselves or with a group of friends. This has been very helpful for a lot of runners, who can not only attend the practice now, but have maintained their shape over the past year of not having their sport.

So far, the team has only had a couple meets. The first being a close overall loss to Whitman, where stars such as Andrew Schell shone, winning the 5,000 meter race with 10 seconds to spare. Isabelle Senate also won for the cats in the women’s 5,000 meter, again being about 10 seconds ahead of the next Walter Johnson runner, Ellie Rogers in second place. Although the team had individual triumphs in this race, the team could not get the win overall, losing 49-69

Coming off of a tough loss to Whitman, the Madcows were able to pull themselves together for a clutch win against rivals BCC. The whole team ran very well, and gave a confidence boost to the runners going forward. The Men dominated, winning 15-46, and the team winning overall 44-72.

Seniors such as Sachin Kammula, Ella Gaul and Alex Scott are still leading the team throughout this time. But, they are seniors, and every year when seniors leave, any team loses leadership, real talent and experience. There are a couple runners that seem they can live up to the standard that these seniors have set. “There is a lot of potential for the team in the coming years,” Kammula said. “We have some young talent such as 10th grader Ben Dutko taking 5th overall and 9th grader Calix McCormick taking 9th overall in the same race against BCC,” Kammula also noted.

With these virtual seasons, especially for seniors, the question of whether this year is enough is always looming. It’s a difficult situation for athletes, because although they are happy to get back to doing what they love, it is tough to finish your high school career feeling like your last season, something supposed to be momentous and special, is not enough. “The shortened season isn’t ideal, but having not been able to compete in over a year, I’m happy with any racing opportunities that we are able to have,” said Kammula about the fall season.

The cross country team has done well so far, but they are pushing themselves to do better every meet. Although the team lacks the state championships to work for, the athletes have the drive to win every meet they compete in, and work to become the best runner they can, even in such an odd year.