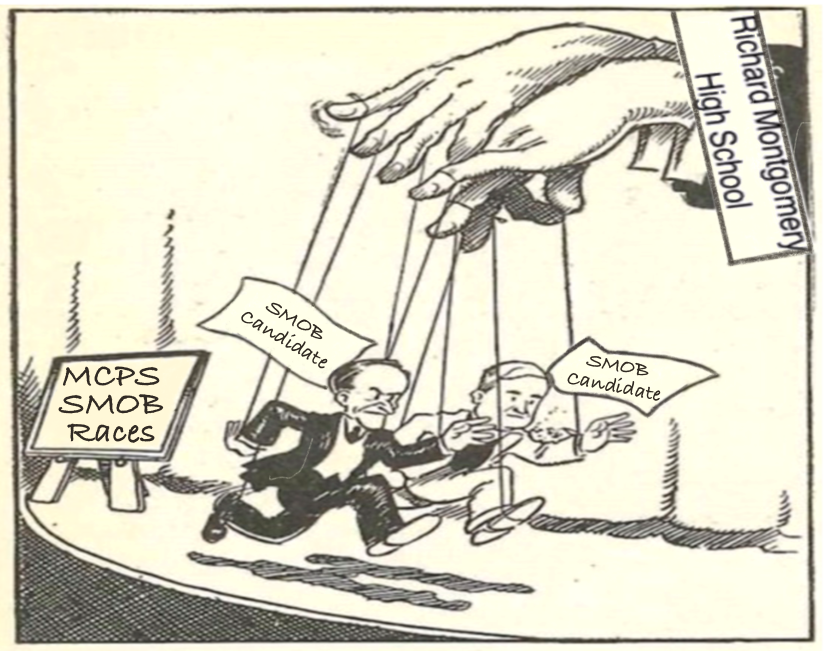 Every year in April, elections take place in Montgomery County’s middle and high schools to elect the Student Member of the Board of Education (SMOB). Whether you think the SMOB is useful or useless, there is something that has been consistent for the last couple of years: A good deal of them have been students at Richard Montgomery high school.

Looking at the past 44 SMOBs, RM dominates. The SMOB-elect is an RM student, that will be their 9th SMOB, the most out of any high school. The only school that comes close is Springbrook, with 6 SMOBs over the years. Out of the last 5 SMOBs, 3 went to RM. At the SMOB Nominating Convention, where the two candidates are chosen, 3 out of the 10 candidates went to RM.

Now I can see why people don’t take these elections seriously.

This April, we selected the 44th SMOB, and both candidates were juniors at RM. This is the second time in recent history where this is the case. In 2018 both candidates were also juniors at RM. To give you perspective, I have been an MCPS student for 5 years and this year will be the fourth election in which I can vote. 50% of the elections I have participated in have been between two juniors from RM. While 50% isn’t a big percentage, it is bad when you realize that there are 26 high schools in MCPS.

The job of a SMOB is to represent the students of MCPS, which is pretty hard to do if a certain school overwhelmingly represents that role.

But why does RM dominate like that? Well, there is a pipeline of SMOB candidates being previous MCR-SGA officers. MCR-SGA is MoCo’s county-wide student leadership organization. On behalf of its constituents, MCR advocates for a variety of student-related policies before the Board of Education and County Council. MCR also supports every school’s SGA and lobbies for relevant bills in the Maryland Legislature. 10% of MCR members are RM students, tied for the most out of any school with Poolesville.

And it even gets worse. The president of Maryland DECA (Distributive Education Clubs of America, an association of marketing students that encourages the development of business and leadership skills through academic conferences and competitions), is also an RM student. And DECA Maryland is a statewide association, not county-wide like the aforementioned positions.

“I definitely think the whole RM to SMOB pipeline or other leadership positions kind of parallels greater inequities in MCPS, it really isn’t fair in terms of county representation,” senior Abby Matson said.

Well RM is an IB school, but so are many other MCPS schools. Maybe running for SMOB is very inspirited in their school environment. But this is a very unusual problem that MCPS should try to address whether by promoting the idea of running for SMOB in other schools or allowing for every school to send only one candidate to the SMOB Nominating Convention so there are never two candidates from one school.

“I don’t think anyone would be opposed to trying to rebalance where representation comes from,” Matson said.