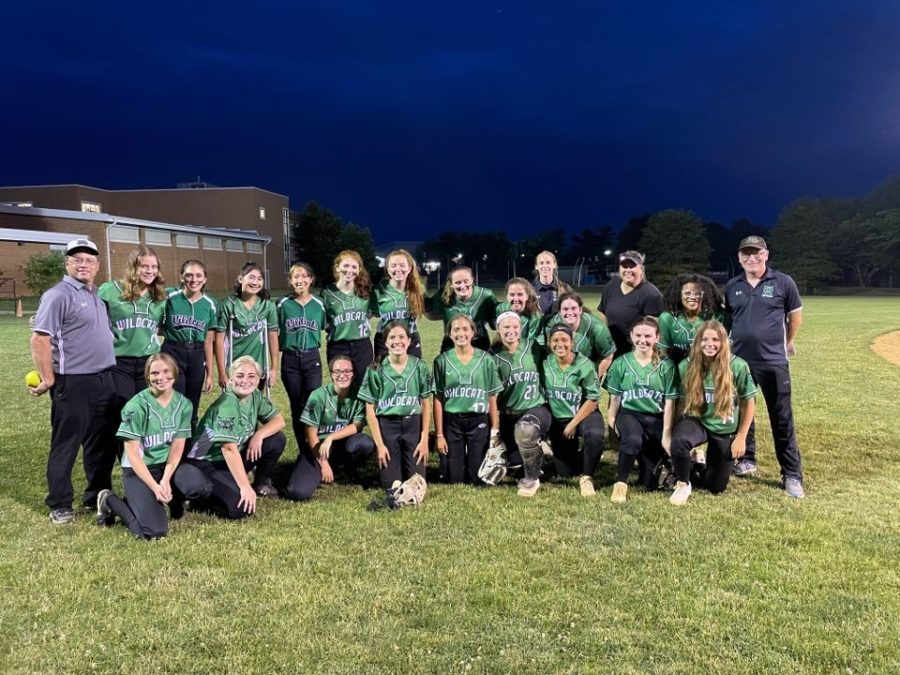 The 2020-21 WJ Softball team poses for a photo after defeating Whitman 5-3 in the second round of the playoffs. They host Wootton Friday evening for the regional championship.

A shortened season complicated by COVID-19 protocols has not stopped the WJ Girls Softball team from having one of their best seasons in recent memory. The girls are rolling at the right time, with an 8-3 regular season record that clinched the number one seed for their region in the playoffs. They defeated Whitman in the second round of the playoffs and will play Wootton Friday evening for the regional title.

The team has been led by seniors Sophia Lynch and Kristin Vargas, who both plan on playing in college. Vargas hit a clutch go-ahead home run against Churchill this past Tuesday that helped WJ inch closer to that number one seed that they officially earned Thursday with a win against Blair. Lynch has used her strong arm at catcher to throw out baserunners. The team has gotten strong pitching from freshmen Sami Rosenberg and Amanda Simensky. Rosenberg had 11 strikeouts in a game earlier in the season. Simensky’s best was eight. The duo shut down Whitman in the first playoff game Wednesday night, with Rosenberg pitching five strong innings, and Simensky closing the last two.

The team has also gotten great contributions from sophomores Brooke Levin and Maya Rickles, senior Emily Horan, and freshmen Carly Gilder, Mackenzie Norris and Rachael Wolfson. Levin has been one of WJ’s best batters. Rickles had a crucial double play in their extra inning win against Churchill last Tuesday. Norris has played a phenomenal center field this season. Gilder has been a very reliable shortstop for the team. Wolfson has had great instincts on the basepaths throughout the season, using her speed to steal bases.

The team has great depth this year. Freshman Allie Berube, seniors Olivia Zaid and Sarah Chatfield have all been ready when called on to pinch hit, pinch run or play defense.

However, the season didn’t start out great for the team. They lost 21-4 in their first game against Whitman.

“We had a ton of starting freshmen who were super nervous and since they got the first game out of their systems, everything got a ton better. Since then we have all gained confidence, strength, and softball IQ,” Vargas said.

WJ rattled off four wins in a row after the opening loss and lost only two games the rest of the season. WJ swept BCC, Richard Montgomery, and Churchill. Throughout the season WJ has battled back from early deficits, winning close games.

“We’re a young team but we have a lot of experience, and because of that we’re very resilient and are able to use the intensity that comes with being down in games. Instead of freaking out when we’re losing, we use that to motivate us and raise our own intensity level, and that’s one of our greatest strengths,” Lynch said.

With the strong finish to end the season, WJ clinched the number one seed for their region in the playoffs.

“It was the best feeling for everyone, especially for the seniors that haven’t had great seasons in the past. It has definitely changed the softball program at WJ,” Vargas said. WJ isn’t satisfied with regular season success. They are looking to build on their second round win against Whitman and keep playing on.

“This is the most talented team WJ has ever had, and with that I hope we can make a deep playoff run,” Lynch said.