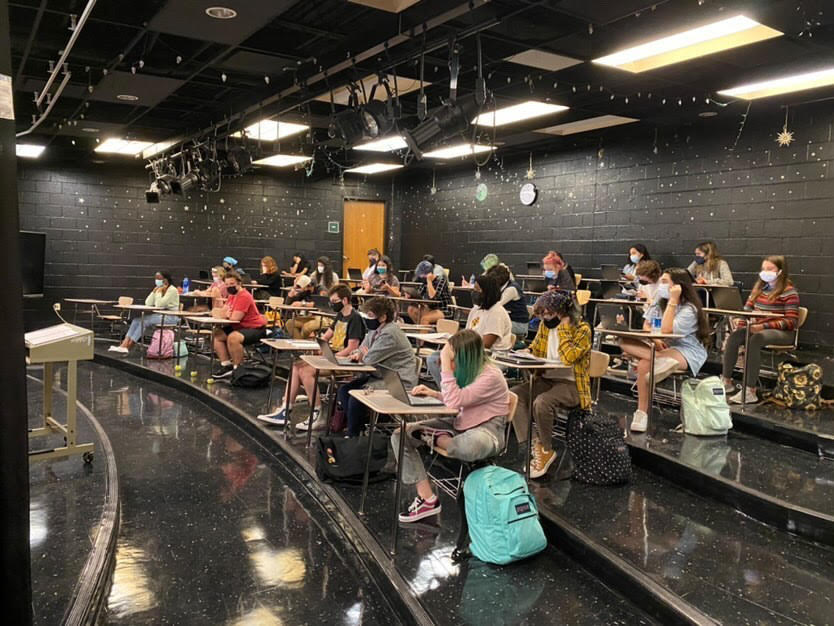 In the dark scenery of room 191, the Walter Johnson S*T*A*G*E students rehearse after school everyday, preparing to shine on stage this fall. Last year’s unusual circumstances made it exceptionally difficult for the theater program to operate. But now that the students have returned to in-person learning, the community is eagerly anticipating what will be their first live show in almost two years.

This fall, the theater production is “12 Angry Jurors,” a S*T*A*G*E version of the movie “12 Angry Men.” The story depicts the jurors’ interactions as they deliberate on the verdict of an inner-city teen accused of murder. The show will be performed on Nov. 12, 13, 19 and 20.

“I’m one of the actors, double cast as Juror #9. One of the interesting parts of the show is that no one is actually named, which preserves anonymity,” senior Amber Mallory said.

The virtual experience of theater students differed greatly from that of the “traditional” experience. Working online, students had to figure out how to develop their characters without body language, while also dealing with the challenges of sustaining the close-knit community virtually. Returning to school from multiple semesters of virtual learning has been both a positive and unique shift.

As the performance dates approach, the students have been progressing past the inconveniences caused by COVID-19 and its consequent precautions. Several months ago, S*T*A*G*E was forced to abruptly leave the set of the ultimately cancelled 2020 performance “Into The Woods,” and upon returning, the crew team was saddled with implementing new cleaning and safety procedures. COVID regulations also enforce mask wearing during rehearsals, prompting actors to improvise creatively.

“Since we are required to wear masks, it’s more challenging to express emotion; however, it is a great experience for all of us actors to work on showing emotion in other ways. We have been able to focus on improving our craft and showcasing our emotion with our body, actions and voice more than ever before,” senior Jakob Sandberg said.

A normal day of rehearsals is an interactive experience. The actors rehearse their lines, participate in character development activities and enjoy a collaborative atmosphere where everyone can strengthen each other’s performance.

“We practice scenes one at a time, working on developing our characters and ensuring that we are accurately expressing ourselves, so that when we perform the show, an audience can have an amazing viewing experience and feel invested in the story that we are presenting,” Sandberg said.

The responsibility of being back has been demanding, but worthwhile, as students adjust to life back at school. Behind the scenes, the stage crew meets three times a week. The crew works on set design, costumes and the training of new crew members.

“Being back in person definitely puts into perspective how much work goes into making the production possible both on and off stage, as well as getting back to our regular rehearsal and crew schedule (which is much longer than what we had to do virtually),” senior Kyaran Brooks said.

Walter Johnson S*T*A*G*E welcomes anyone who wants to be part of the community. Those interested in joining now can assist behind the scenes by joining the crew, selling tickets for the show in the box office in November or being a member of the House crew, which welcomes and directs audience members to their seats during the show.

“While S*T*A*G*E is quite serious as you have to be dedicated to your work and get it all finished in time, it’s also a great way to make new friends and meet new people. On top of that, you are doing something you enjoy!” freshman Ash Almendras said.