The Significance of Thanksgiving 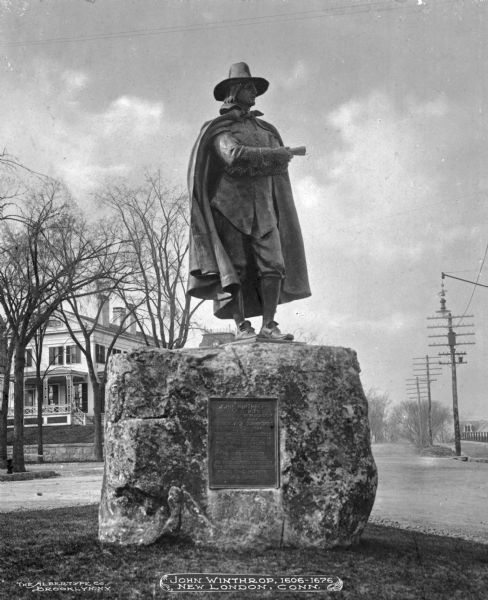 This statue remembering John Winthrop lays in New London, Connecticut. Winthrop was the Puritan Governor. He is most known for his "city upon a hill" speech.

As the leaves are starting to change into bright, vibrant yellow and red colors, the warmth of Thanksgiving is coming around the corner. Thanksgiving is such a special time in the fall season. The delicious, traditional foods we eat is one component that all people enjoy on Thanksgiving. However, while it is true that Thanksgiving foods are delicious, there is more to Thanksgiving than just the turkey, mash potatoes, and pumpkin pie. The reason why we are celebrating often gets overlooked on Thanksgiving due to the distractions of the food. However, we must not forget that the reason we are even celebrating with a feast is because of the courage, the strength, and the resilience of the Pilgrims and Native Americans.

I started thinking about this because of my AP U.S. History class. Earlier in the year we did a DBQ about the colonists coming to New England. We looked at many different sources, including John Winthrop’s speech about a city upon a hill. Winthrop was the Puritan Governor and although he didn’t board the Mayflower, he still came to New England, as the other Pilgrims did. Winthrop’s speech, “A Model of Christian Charity,” was written while he was still aboard the Arbella with other passengers, just 10 years after the Pilgrims landed at Plymouth Rock. In this speech, Winthrop shared his vision of the need for a community based on moral and Biblical principles and argued that America is an exceptional country where the individuals can finally be free to express their desired faith without fear of persecution.
He also talked about how this community — whether rich or poor — must be “knit together…in brotherly affection.” Winthrop urged strong bonds to form — he wrote: “We must delight in each other, make others’ conditions our own, rejoice together, mourn together, labor and suffer together…as members of the same body.” This idea of a shared community has gotten lost in all of the political divisions, which seem to be on the rise in recent years.

And so one day, a Native American, named Samosout greeted the Pilgrims in English and offered to help them, along with Squanto. Squanto taught the Pilgrims how to fish, how to grow corn and guided them to the path of success. In fact, William Bradford, the Governor of Plymouth Colony wrote in his diary how “Squanto stayed with them, and was their interpreter, and became a special instrument sent of God for their good, beyond expectation…and never left them till he died.”

Winthrop says in “A Model of Christian Charity,” that “we must consider that we shall be as a city upon a hill.” This is what we should remember and celebrate when we all come together at the table on Thanksgiving — “the city upon a hill.” We must acknowledge how fortunate we are now to live in a country of opportunity, liberty, and diversity. We must celebrate the Native Americans’ good will to the first settlers and never forget their guidance, as we’ve sadly done before. We can learn from the first Thanksgiving to overcome our political differences and unite on this holiday as did the Pilgrims and the Native Americans despite their different backgrounds.