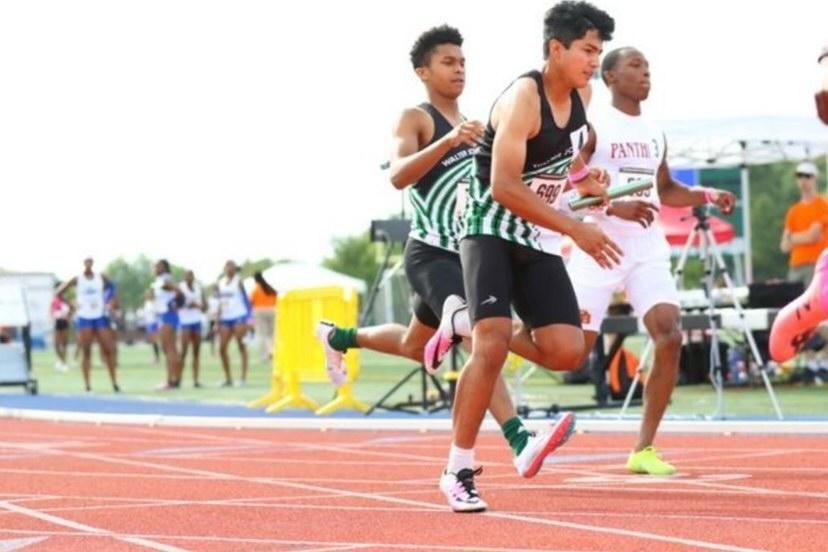 Junior Quentin Williams and senior Fernando Ibarra sprint past the competition in the relay event. After a very strong spring season the WJ track team looks to carry their success into the indoor season.

The vaunted indoor track & field program that won states last spring returns for the winter season ready to cement a dynasty. Both girls and boys teams will be looking to make their mark on the Maryland track scene.

Coming into the winter season, the team is filled with confidence. This confidence is justified as last spring’s team proved to be one of the premier track programs in the state. Expectations are high as the team is focused on making another run at the state title.

“Returning from last year has been great. We’re coming off a state championship for the boys side, so trying to come back and replicate that will be a lot of fun. Expectations are pretty high, we performed exceptionally last year so it’s all about seeing if we can replicate that,” senior Lucas Boiteux said.

The high success last year hasn’t led to complacency. The team is more dedicated than ever to the grit and grind that is demanded of school athletes.

“What I expect this season is that everyone works as hard as possible because that is what leads to a team making the state championship,” junior Quentin Williams said.

Ever since the state championship the entire team has been anxious to return to the track for the winter season.

“All the way until the first tryout of indoor track, I was itching to get back into season so it was great to return to the sport I love with my amazing teammates,” Williams said.

Just like every other aspect of normal life, track was also interrupted by Covid-19. The pandemic impacted track even more so than other sports due to the nature of sprinting itself.

“Covid took a massive toll on the track team. Unlike other teams we missed not one, but two seasons. One indoor and one outdoor. Plus, coming back has been very different. We first had to train with masks on, and that was not easy. Track is strictly conditioning so wearing masks for upwards of two and half hours was literally difficult. Now that it’s indoor season, we have to compete inside so spots are very limited. It sucks because it isn’t giving everyone an opportunity to compete as much as they should,” junior Sydney Morgenstern said.

In spite of all of this hardship and setbacks, the team is still looking forward to competing at track meets this winter.

“I think the most exciting meet will be Christopher Newport. It is very selective and the competition is fierce. We didn’t get to go last year because of COVID so I think this year is going to be especially awesome,” Morgenstern said.

Track is unique from other sports in that meets are based on individual performance instead of a greater team effort. In order to be successful and competitive the team must have great individual performers as well as a strong overall team.

“Kids to look out for include myself, Quentin Williams, Fernando Ibarra, Lukas Bournias, Kiran Sen and Anwar Umar on the boys side. For the girls keep an eye on Sydney Morgenstern, Raquel Tolin and Mwisala Lupunga-Phillips for this upcoming season,” Boiteux said

The next meets are Dec. 18 for the Grant Holloway Holiday Invitational at the Virginia Beach Sports Center and Dec. 22 at the Prince George’s Sports and Learning Center.