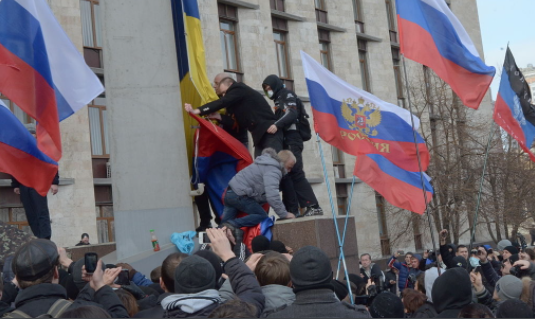 Russian citizens are protesting against the actions of the government but are silenced by being arrested. Russian President Vladimir Putin is quickly taking control of the area.

As a result of the recent Russian invasion, Ukraine has been under martial law as the capital of Kyiv is under attack. Russia had barraged the land and airstrikes have killed at least 137 Ukrainian troops and civilians and wounded 316 others, according to NPR.

Ukrainian troops have taken back the Antonov Airport after Russian forces had seized it earlier today; the airport was a way for Russians to land their troops and equipment in the capital of Ukraine. Early this morning, Ukraine had been hit by Russian rocket strikes, one day after US Secretary of State Anthony Blinken told CBS that Kyiv “would be under siege.”

“I think that what’s going on between Russia and Ukraine could have been avoided and that Ukrainian civilians shouldn’t have to go through this. And that if it comes to it, Biden should take the necessary actions to help Ukraine,” senior Sara Susa said.

On Feb. 24, the first day of the invasion, at least 127 civilian casualties had been reported due to shelling and airstrikes, according to a spokesperson for the U.N. Human Rights Office.

Although Russian Foreign Minister Sergey Lavrov has said that “nobody is going to attack the people of Ukraine,” Russia continues to strike many areas of Ukraine.

Russia’s attack on Ukraine is quickly escalating as Russian forces have already attacked from three sides by land, sea and air. Russia’s invasion of Ukraine is just the beginning of a large-scale invasion according to a senior US defense official.

The Ukrainian government banned all men aged 18-60 from leaving the country so that they can be enlisted and fight Russian forces.

“It’s unbelievable how Putin has pushed forward with the invasions in Ukraine, and his motive is awful,” senior Izzy Senfaute said.

Many have turned to the US, and President Joe Biden has announced that he will be hitting Russia with new sanctions on their military and economy. Various other world leaders are also expected to announce new sanctions on Russia in response to the invasion of Ukraine. These new sanctions will limit what will be exported to Russia.

Biden has announced that the US is prepared to assist Ukraine and its people after the invasion. Biden had ordered more US troops to Europe in response to the recent events but had emphasized that US forces “will not be engaged in a conflict with Russia in Ukraine.”The reasoning behind sending US forces to Europe is to defend NATO territory with American powers.

The US Defense Secretary Lloyd D. Austin III ordered 7,000 service members to be stationed in Germany to help avert Russian aggression; this will bring the number of US troops in the area to over 20,000.

The US embassy in Kyiv advised that all Americans leave the country immediately.

“ I think it’s a crazy scenario overall and that it is a hard question whether or not the US should be involved. To be factual, Joe Biden does not have the best historical track record with foreign policy so I think for now we should avoid it. On topics of Russia, I am scared of Putin’s actions and I think he is pushing NATO to show them what he can do and get away with. He is doing that specifically despite knowing that America is against it because he knows that we, as a country, are very divided and weak so that we are at a point where we won’t take action,” senior Moses Eschrament said.

Multiple other leaders had condemned Russian President Vladimir Putin for sparking more conflict and war in Europe by attacking Ukraine.

Many Central European countries are preparing themselves for a potential mass arrival of refugees from Ukraine. Many residents of Kyiv are sheltering in an underground subway station as it is near impossible for them to flee at the moment.

These recent events have sparked protests in multiple Russian cities, ending up with citizens arrested.

“European countries are not leaning towards punishing Russia to the extreme with the financial accounts but Biden says the idea is still on the table. Biden is just indirectly punishing Russia with sanctions because he doesn’t want to be directly involved unless Russia chooses to become a country involved with NATO. I think it’s a smart decision because he isn’t putting the US directly at war,” sophomore Leire Vasquez said.