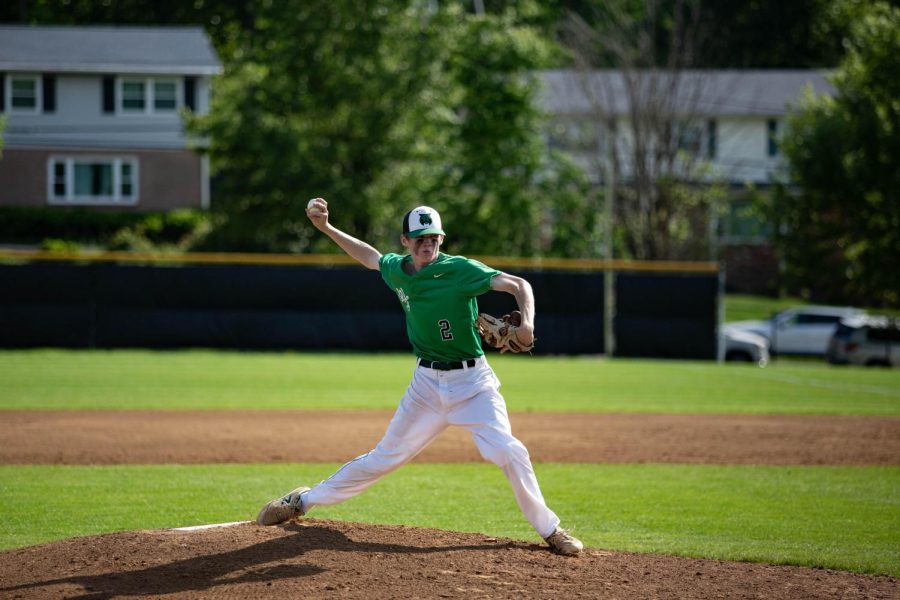 Senior pitcher James Richardell fires a changeup into the strike zone. Richardell gave up eight runs over two innings as the Wildcats season came to a close in an 11-6 loss.

On Tuesday, the Wildcats baseball team season came to a halt at Winston Churchill High School as the Wildcats fell to the Bulldogs in the regional championship with a chance to advance to the state quarterfinals on the line.
The Wildcats came up short in an 11-6 loss that was mostly defined by a few early home runs by the Bulldogs’ Erik Rinder, Michael Demske and Chris Hacopian. After three innings, the Wildcats were down 11-0, but they did not back down. In each inning after, the Wildcats scored at least one run.
“Coach was like, don’t let the seniors go out like this, and in the last inning there was a lot of energy, we picked up the bats a little bit, we hit the ball a little bit. If we came out early with that kind of energy, we would have won that game,” freshman third baseman Andreas Johnson said.
The Wildcats had a pretty good day at the plate with junior third baseman Braden LaChapelle having a multi-hit game and sophomore pitcher Jay Wandell having a three-hit game with three RBIs.
“I thought as a team we hit the ball pretty well today. We even outhit them thirteen to seven. It just came down to their hits coming in clutch spots with runners on base,” LaChapelle said.
While senior pitcher James Richardell gave up eight runs and junior pitcher Leo Simpson gave up three runs, the Wildcats pitching held the Bulldogs to zero runs in the last three innings. Senior and Lycoming College baseball commit Sammy Polott pitched the sixth inning, gave up zero runs and struck out three batters.
“I took advantage of my last chance even though I did not know it would be my last chance… I’m going to miss this team most definitely. It’s one of my favorite teams I’ve ever played on,” Polott said.
The Wildcats finished the season with an 18-3 record with their only losses coming at the hands of the Bulldogs and the Whitman Vikings.
“I’m proud of everyone on our team. I think we had a great season and played incredibly well. While we may not have ended it in the fashion that we wanted to, I’m glad that we got to have the season that we did. I wouldn’t change anything,” senior first baseman Sam Grande said.