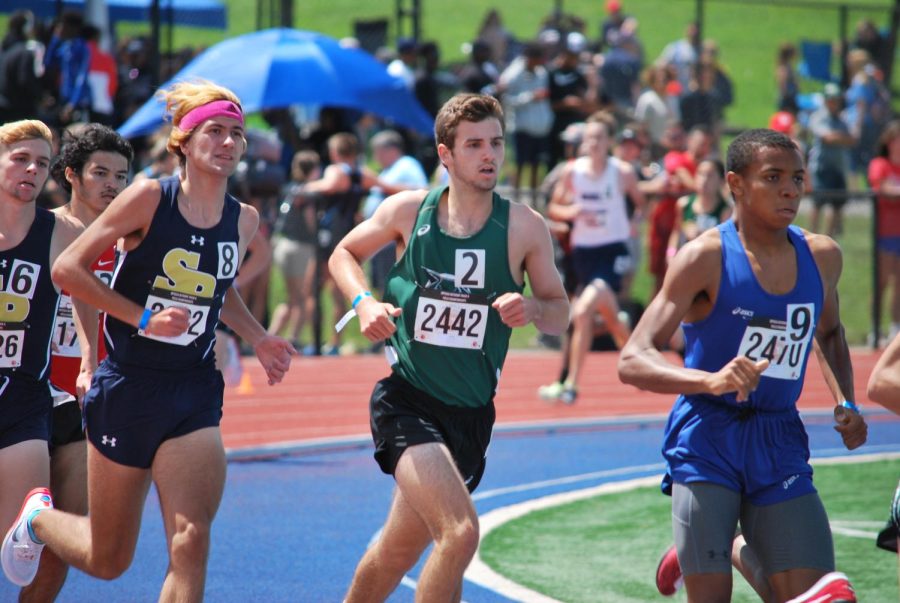 Senior Andrew Schell runs in the 3200 meter race at States. He finished in fourth place and ran a time of 9:27.

Despite all the chaos during States, the boys track team finished fifth in 4A and the girls track team had some great individual performances. States was supposed to be split up into two days, Friday and Saturday. However, on Friday, a couple of hours before the meet started, they announced that day one of the meet is postponed due to the tornado warning across Maryland. This turned Saturday into a full-day meet instead of starting in the afternoon.

After winning county and regional championships this year and States last year, the boy’s team came into States with big expectations and hopes. Injuries, however, derailed those hopes.

“Well overall given some of the bad luck we had at the end, especially with the boys with some injuries, I felt like we performed very well. The fifth-place finish was impressive considering all the injuries. Although it was a little disappointing coming back from winning the year before, we had a lot of injuries and stuff to contend with,” track coach Tom Martin said.

On the long-distance side, some notable performances include senior Andrew Schell who finished 4th in the two-mile and sixth in the mile and senior Yariv Simhony who finished third in the 800-meter race. The boys 4×800 meter relay team was also able to take second, finishing only behind state champions Severna Park.

“I was going into it just hoping to place in the top three. I took that into the race and made it my goal to stay on the top pack and give it all I got,” Schell said.

The sprinters also had some great races as junior Quentin Williams finished third in the 400-meter race and the 4×400-meter relay team also took third place. They haven’t faced that much competition throughout the season but States provided a tough test for them.

“Seeing the times some of my competitors were running made States fun. We don’t get to see a lot of good athletes in our region especially for sprints so seeing the fast part of Maryland run was a great experience,” senior Fernando Ibarra said.

The girl’s team also had similar issues as they dealt with major injuries that hurt their team placement. With the team missing their fastest long-distance runner and another runner that was a key piece to the 4×800 relay, it was always going to be tough for the girl’s team to finish well. The injuries, however, helped fuel the runners.

“I was motivated and focused, especially because one of our prospective relay legs couldn’t be there so I wanted to run well for her,” senior Emma Kothari said.

For the seniors, it was a great last meet for them and gave them the opportunity to compete one more time in their high school career.

“The best part of States was just being able to compete one last time with the team, but also against the same people I’ve been racing for the past four years who have helped me run some fast times over the years,” Schell said

With many of the WJ runners at States being seniors, the team will have to have many runners step up next year to fill the role that the seniors played.

“I am looking forward to seeing, every year teams are different, you can have 90 percent returners, but the dynamic is always different. I get excited about who is gonna take charge and be the person who is the leader. I want to see who is going to do those roles, because, for me, I don’t make anybody take the roles, I like to sit back and watch somebody take those roles. It is more satisfying because I feel like it gives them the incentive to want to do that,” Martin said.