Top Gun: Maverick: Rediscovering the experience of the big screen 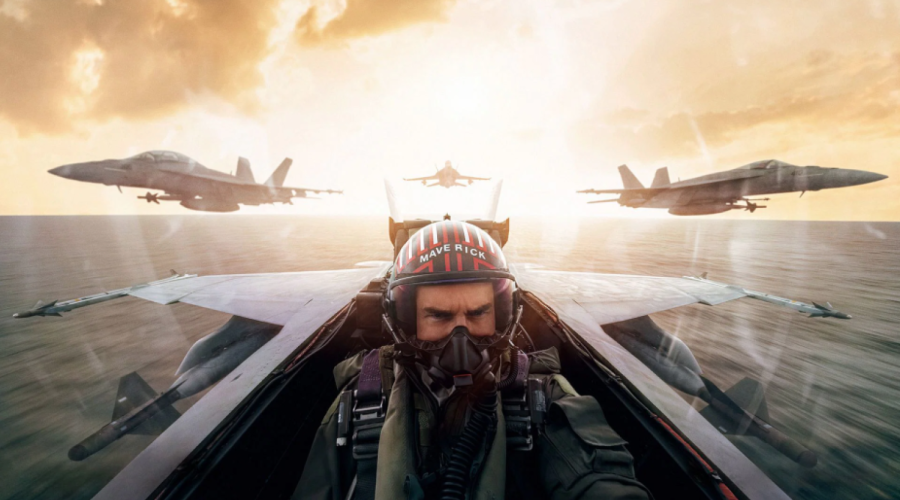 Top Gun: Maverick became a big summer blockbuster hit, making $1.355 billion dollars in the box office. The film was ready for release in 2020, but it was put on hold due to Covid-19. The two years were worth the wait. Top Gun: Maverick brought back the magic to the big screen that many of us had been missing.

“I feel the need…the need for Top Gun: Maverick!” Thirty-six years after the making of the original Top Gun, the long-anticipated sequel came out this summer after being put on hold for two years due to Covid-19.

When Covid-19 hit, movie theaters were shut down and streaming became the new normal. The fate of movie theaters seemed bleak — that is, until “Top Gun: Maverick” jumped onto the big screen in late May. The movie became a big summer blockbuster hit, making $1.355 billion dollars in the box office by mid-August.

“Top Gun: Maverick” could have just come out through a streaming network in 2020, but Tom Cruise (Maverick) and Paramount Pictures decided that this movie needed to be viewed by an audience in the cinema. Let me just say that seeing “Top Gun: Maverick” in the theaters this summer was an experience.

This movie is what got many of us out of our homes and off our computers. The wait was worth it, starting with Cruise’s touching welcome recorded for the people who came out to the theaters.

“Hi, everyone. The summer is almost here and Top Gun: Maverick is going to kick it off. Our extraordinary cast and crew gave it their all to bring you the most immersive, authentic and entertaining cinematic experience. There’s real jets, real popcorn…on the biggest screen exclusively and only in the theaters. So I hope you enjoy because we made it for you,” Cruise said.

“Top Gun: Maverick” only gets better from this opening message. The movie captivates the audience immediately with its well-developed plot and enticing characters, as well as its great soundtrack. The movie will stir your emotions and will have you on the edge of your seat the entire time.

One of the most touching scenes in the movie is when Maverick visits Iceman. It’s a very powerful moment between the two old rivals, as Iceman is able to help Maverick persevere through a very difficult time. In fact, it is Iceman who gets Maverick the job as a teacher at The Top Gun Naval Fighter Weapons School.

Maverick is tasked with training a young group of fighter pilots for a very dangerous and difficult mission. One of the students happens to be Bradley Bradshaw (Rooster), who is the son of Maverick’s late best friend.

“Top Gun: Maverick” greatly outshines the original 1986 Top Gun. The acting is phenomenal, especially seen with Cruise, Miles Teller (Rooster) and Glen Powell (Hangman). Even though this movie is the sequel to Top Gun, I would argue it’s a completely different movie from the original.

“Top Gun: Maverick” is not your ordinary action film, but a reflection of life itself. Fractured relationships are a central theme. It involves the idea of letting go of the past, as well as forgiveness. The movie also touches upon what it means to age and grow older. Death is a major aspect of the film, as well as grieving with loss. Friendship and team-building are also relevant elements seen in the movie. It also touches upon aspects of duty and honor.

The mission that the characters must complete is fairly easy to understand, as are the action scenes. In fact, all the action scenes are real. Real F-18 planes were used in the film. The actors had to go through rigorous training that Cruise set up for his fellow cast members. The actors are actually in the planes (though they are not flying them). So, their reactions in the planes seen in the movie are indeed their real reactions.