Running Into Cross Country Season 2016: A Look Ahead 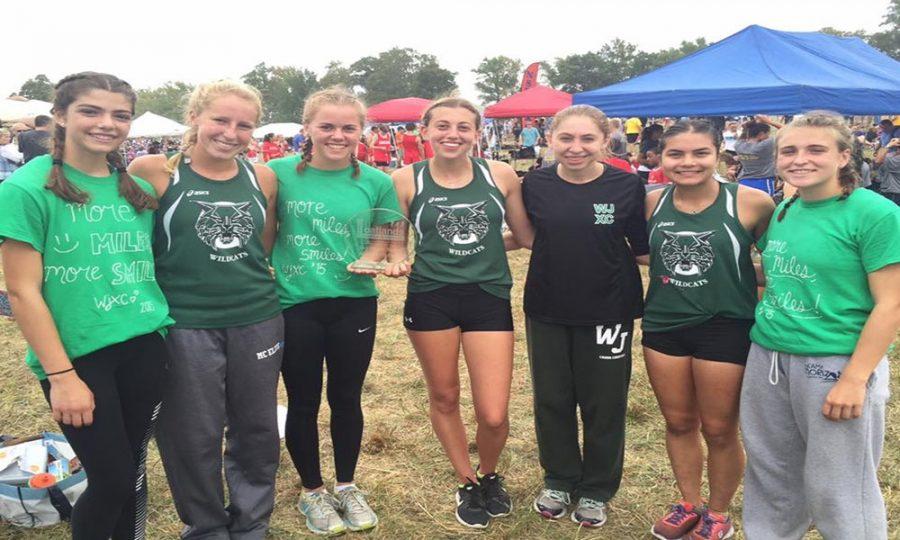 WJ girls cross country, the reigning state champions, are seen here after winning a race at an invitational meet earlier this year.

The WJ cross country team is poised for a winning fall season. Though the school year has just started, this speedy team has been preparing for competition since mid-August. Because of the intense training that has taken place for almost a month already, the team is prepared to face their races with confidence, and, of course, speed.
Tom Martin, head coach of the cross country team and WJ tech teacher, sees lots of potential in the upcoming season and in the runners committed to the team.
“We have an opportunity on the girls’ side to be pretty good,” Martin said, “and it’s going to be dependent on what happens, when the girls make that commitment to do the training, to get better.”
Although the team has been training for about a month already, Martin feels that the runners need to work on improving further to achieve the goals set for them and meet the expectations of the team, especially on the boys’ side.
“I’ve got varsity guys who are going to miss three weeks of meets because they have SAT prep classes, and I’m pretty sure they could have scheduled them on other days than Saturdays,” Martin said, noting concern about the level of commitment on the team.
However, Martin believes that freshman on the team could provide an impressive future on the boys’ side.
“What I expect is for us to develop a nucleus of freshman boys who are excited about this sport and will, in ensuing years, build a great team,” Martin said.
On the other hand, as the three-time defending state champions, the girls’ side of the team has a high level of dedication and a determination to stay on top.
“We just want to be state champs again, and just have everybody have a really fun time because this sport can get so stressful, and we just want everybody to be excited about coming to practice,” senior captain Kati Kirsch said.
The newcomers to the team have mixed emotions about the upcoming season.
“I’m nervous, but I’m also really excited to run,” freshmen Caroline Kennon and Megan Rinehart said before a race.
The team has run only one 5k race this season so far, and already proving true to their reputation with a solid win.
With a full season ahead, and talent to spare, the 2016 cross country team seems to be shaping up and ready to dominate the races.