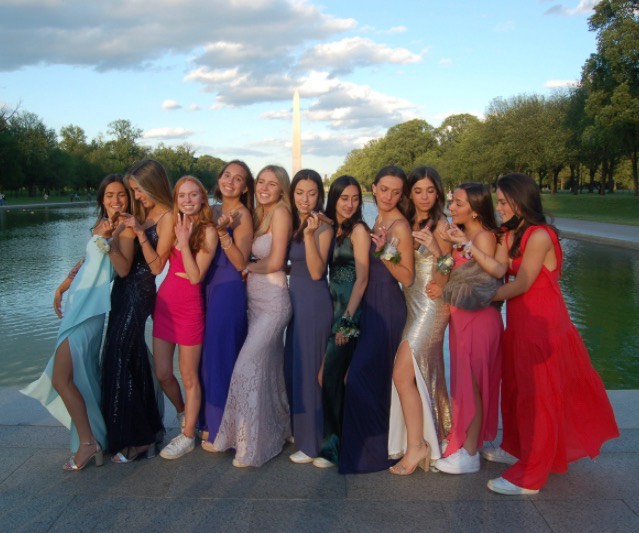 Senior Emelia Isola and her friends didn't let the pandemic stop them from doing prom traditions. The group took photos in front of the monuments, just like so many before them.

The latest in a long string of senior year disappointments for the class of 2021 was the canceling of the traditional school sanctioned prom. It was official: there would be no fancy venue, no After-Prom for seniors to gush about to their underclassmen friends. Luckily, the class of 2021 is resilient.

Even though prom isn’t happening officially, many students aren’t willing to give up some of the most quintessential prom experiences (including the classic photoshoot in front of the Reflecting Pool) and have already decided to meet up with their friend groups and create their own mini prom.

“Since the school isn’t hosting a prom this year, my friends and I are going to dress up and take pictures in DC and then have a socially distanced dinner outside afterwards,” senior Nicole Uhl said.

From the start, the class of ‘21 has had to make the most of a difficult situation, and prom is no different. Even though this year’s seniors haven’t had the year they expected or deserved, it’s good to see that many students aren’t letting it get them down.

“I’m upset about not having the usual big party, but I’ll still get dressed up with a couple friends, so I’m not too sad,” senior Naomi Johnston said.

Recently it was announced that the PTSA will be hosting a “Senior Party” at High Point Farms on May 15 as a replacement for the usual After-Prom event that would be hosted at the school. The flyer tells seniors to look forward to food, games, and entertainment, but also to expect full social distancing measures to be in place in accordance with Montgomery County guidelines.

This event, on top of the unofficial proms many are planning on attending, will hopefully fill the void that many students are feeling in the absence of these classic senior year traditions.

“This was definitely not the prom we expected, but I’m glad we’ve found a way to dress up and enjoy ourselves considering the circumstances,” senior Becca Bennett said.

It was also recently announced that graduation will be in-person, outside on the football field, which should be some consolation to a class that has missed out on so much this year.