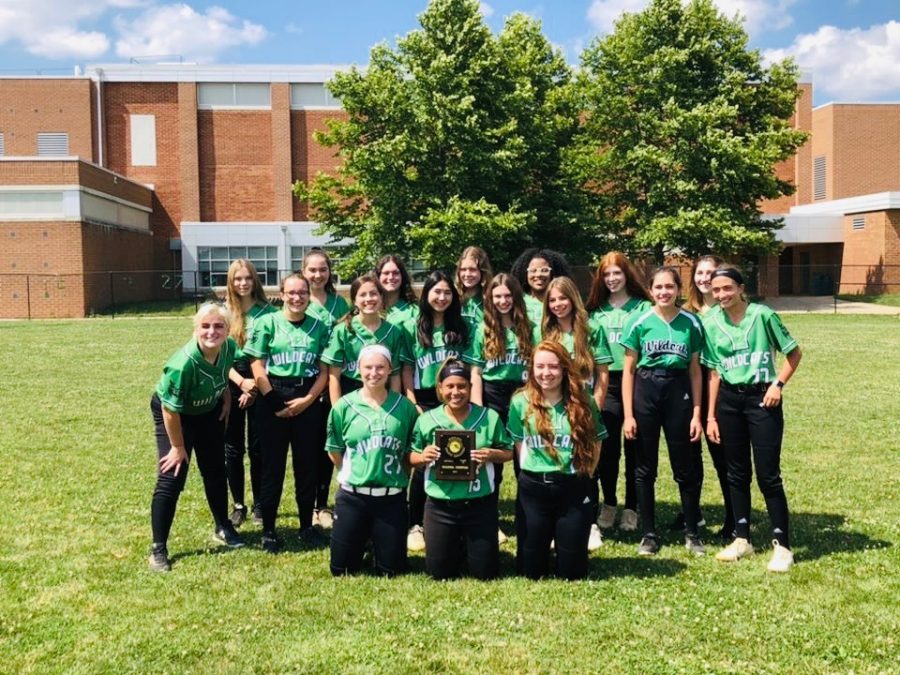 The 2020-21 Regional Champions take a photo with the trophy. They'll play for the state semi-finals Tuesday afternoon.

WJ and Wootton had played a back and forth game all afternoon. But when WJ pitcher Amanda Siminsky cleanly and quickly got two outs in the top of the 7th inning, it looked like WJ was going to pull through. But Wootton rallied. A few batters got on base, and all of a sudden WJ’s 10-5 lead looked in peril. Wooton’s All-American shortstop rifled a hit into center field. One run scored. Another Wootton player headed to third base. WJ center fielder Mackenzie Norris threw the ball home. Catcher Sophia Lynch caught the ball and sent it to third. Third baseman Kristin Vargas put the tag on the Wootton baserunner. WJ had won it. The girls gathered together in celebration in left field, winners of regionals for the first time in school history.

“It was an unreal feeling! My freshman year, we had 2 wins, so to have experienced the program back then and to see its growth to now has been unbelievable. Especially with such a young team, I wasn’t sure how we would hold up under the pressure of such a major game, but the underclassmen really showed up and it was an amazing win,” senior Lynch said.

WJ trailed 1-0 after the first inning. In the second inning, the Wildcats got going, scoring four runs. WJ capitalized on wild pitches and a single from senior Emily Horan on their way to regaining the lead. WJ stretched the lead to 7-2 in the fourth inning.

In the top of the sixth Wootton rallied. Trailing 7-2, they scored three runs to tighten up the game. Wootton hit two doubles in the inning. Freshman Sami Rosenberg was relieved by Siminsky who got the third out of the inning. Heading into the bottom of the sixth, WJ needed insurance runs. Pinch hitter freshmen Allie Berube reached on an error after fouling off a number of pitches to stay alive against the Wootton pitcher. Vargas, up next, got a walk. Siminsky then walked. The bases were loaded with no outs for Lynch, one of WJ’s captains. On a 2-2 count, Lynch ripped a double over the left fielder’s head that got all the way to the fence. Freshmen Rachael Wolfson, and Vargas came around to score. The lead was now 9-5. WJ would tack on another run to take a 10-5 lead into the final inning. WJ would hold off Wootton with the dramatic final play—the throw to third to tag out the runner.

Even when WJ was down or when Wootton was on the comeback, the Wildcats remained calm, loose and collected. Coach Richard Carter attributes this to the phenomenal team chemistry and the desire to just “have fun.”

“They are a very close team. Every player supports the other and they have bonded really well. It is a true team mentality. Our leaders have done a really good job of keeping what is important in the forefront. Our seniors Sophia Lynch, Emily Horan, Kristin Vargas, Sarah Chatfield, Olivia Zaid and Amanda Prince always place an emphasis on the importance of having fun and being there for each other no matter what happens,” Carter said.

Top performances of the day came from Lynch with the huge hit, Vargas with a few walks on the day, Rosenberg and Siminsky who combined held Wootton to 5 runs and Carly Gilder who had a triple.

WJ’s incredible season will continue Tuesday, when they’ll play for a chance to be in the state semifinals. Their opponent is Catonsville High School.