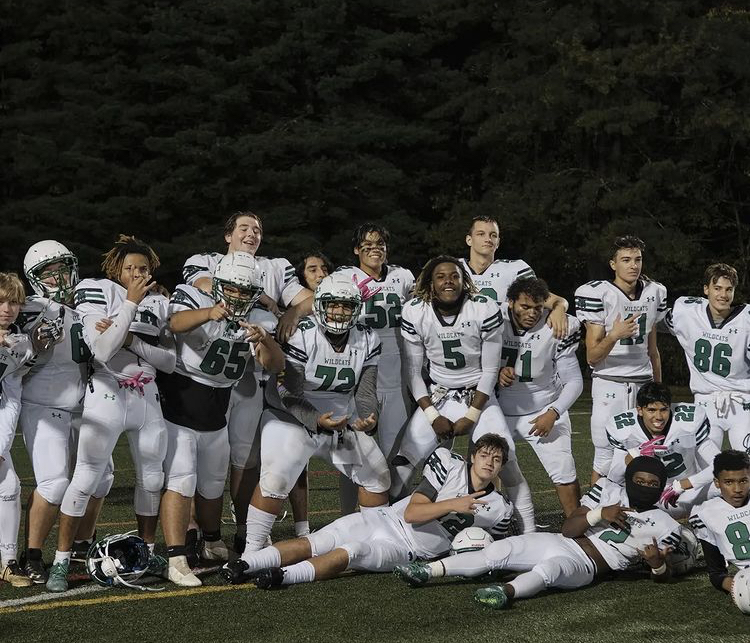 The Wildcats celebrate their 27-8 victory against the Wootton Patriots. The Wildcats closed their regular season with this win and want to ride this momentum into the playoffs.

The Wildcats closed the 2021 regular season last Friday with a 27-8 victory against the Wootton Patriots, finishing the year at 5-4. The Wildcats have had an up and down year with key injuries derailing the team.
The Wildcats started strong with an exhilarating 24-21 victory against the Churchill Bulldogs with senior quarterback Will Gardner running in the game winning touchdown in the final seconds. They followed that up with an absolute thrashing of Whitman 42-8 where seniors running back Kenneth Dempster and wide receiver Lucas Boitoex dominated.
The Wildcats first home game would prove to be a challenge as they took on one of the best teams in the state, Quince Orchard. The Wildcats fought hard leaning on stellar performances from Gardner and Dempster, as well as huge defensive plays from senior Amir Frye and junior CJ Newman who were monsters, forcing pressure all night leading to multiple sacks, a fumble and causing a pick.
The Wildcats fought hard to stay in the game but found themselves down 14 halfway through third, when multiple muffed punts and special team mistakes allowed QO to put the game out of reach. The 63-28 final score was not representative of how close the game was or how hard the Wildcats fought that night.
The Wildcats were able to bounce back with a blowout win against the Wheaton Knights, a game in which Dempster was unstoppable, as he was able to dart through every gap he saw in the Knights defense.
The following week the Wildcats suffered their worst loss in a few years with a 74-0 loss to Northwest. Gardner started the game with two straight pick-sixes and a third pick just in the first quarter which had him flustered, causing him to be off his game for the rest of the night. This game definitely demoralized the team and followed them into future games.
The Wildcats pulled out a huge win on the eve of Homecoming defeating rivals the Barons of BCC. Heading into the game there was a lot of trash talk between the two schools on social media. The Wildcats pulled out the 24-21 win with kicker Kevin Lukash sneaking in a 29-yard field goal in the final minutes of the game.
The Wildcats headed into the next week’s matchup against Richard Montgomery severely banged up as they were missing their No. 2 receiver in Christian Langford and starting corner Jalen Scott. Down 38-6 at halftime, the Wildcats injuries were hitting them hard. A strong comeback bid in the second half was almost successful though they fell short, 47-32.
The Wildcats passing game struggles continued into next week against Seneca Valley, as they fell 42-7. Gardner was harassed all night by the Seneca Valley pass rush. The offense made plays, but could never put a drive together.
The Wildcats closed out their regular season on a strong note defeating the Wootton Patriots 27-8. This is the kind of momentum with which the Wildcats want to be heading into the playoffs.
Head coach Larry Hurd is confident in the team he has despite the injuries they’ve suffered.
“The next man has always stepped up, we’ve done what we needed to do, those who have stepped in for those who are injured are starting to catch their stride,” Hurd said.
Starting senior quarterback Will Gardner is also confident in the team despite missing multiple key players.
“We’ve made some adjustments for our missing personnel and were definitely ready to play,” Gardner said.
The Wildcats head to BCC tonight in the first round of the playoffs. The Wildcats feel confident and know they have a good game plan, they just need to make sure their mentality is in the right place.
“The biggest thing is coming out strong and coming out to fight,” Gardner said.