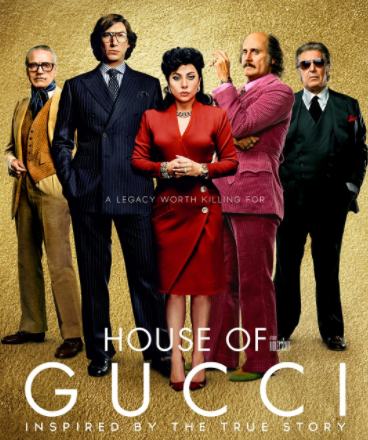 Released November 24, 2021, "House of Gucci" stars Lady Gaga and Adam Driver as Patrizia Reggiani and Maurizio Gucci respectively. "House of Gucci" was filmed in Italy, and is the second film in which Gaga has played a major role, with the 2018 remake of "A Star is Born" being her first.

“House of Gucci” is full of paradoxes. The film follows Patrizia Reggiani (Lady Gaga) as she marries into the wealthy, fashionista Gucci family; however, her ambition and plans for the Gucci brand gradually unravels the family in question, pitting them against one another and eventually culminating in Patrizia jealously ordering the murder of her ex-husband, Maurizio Gucci (Adam Driver). But while “House of Gucci” is bursting at the seams with interesting contradictions—from the conflicting desires for the brand held by Gucci heads Aldo (Al Pacino) and Rodolfo (Jeremy Irons), to Patrizia’s efforts to bring the family closer together, only to tear them apart—by far the most glaring and hindering paradox is how the movie runs for over two-and-a-half hours, yet utterly fails to fully delve into any topics.

Instead of focusing on one aspect of the Gucci family—such as the chilling of Patrizia and Maurizio’s relationship, or the downfall of the Gucci brand—“House of Gucci” tries to cover it all. But the issue with this is that in trying to focus on everything, they end up focusing on nothing at all. For example, the development of Maurizio and Patrizia’s relationship is extremely rushed; although the juxtaposition of Patrizia’s aggressive romantic pursuits and Maurizio’s extreme awkwardness is amusing, Maurizio seems to go from being unsure of Patrizia to declaring his love for her to his father in the span of five or so minutes.

“House of Gucci” is also extremely liberal with its cutaways. At times, it seems as though the entirety of the movie is just a bunch of scenes spliced together, jumping through space and time at an almost dizzying speed. For example, the jump from Rodolfo being ill to Maurizio gazing down into Rodolfo’s casket was so sudden, I felt like I had gotten whiplash.

But, if you’re able to look past these flaws, “House of Gucci” has a lot hiding under the surface. The performances are excellent—which was a given, considering how star-studded the cast was—but the one that truly shines through is that of Lady Gaga’s.

It would have been easy to play Patrizia as a one-note villain. After all, she dismantled the Gucci family for her own gain and ordered her ex-husband’s murder. But Gaga manages to portray Patrizia as a complex character: one who was ambitious, yes, but who also loved her family and was devastated by her divorce. (The scene where she shows up at Maurizio’s residence after they’ve divorced, pours her heart out to him and hands him a photo album she and their daughter made together is one of the most heart-wrenching scenes in the movie.)

The dissolution of Maurizio and Patrizia’s relationship, depicted by icy indifference from Driver and heartbreaking confusion and anger from Gaga, is also extremely well-done. Even if it, like much of the movie, was slightly rushed, it’s so realistic that it’s often difficult to watch.

And, of course, given the film’s focus on a fashion brand, the wardrobe and styling was guaranteed to be fabulous. All of the outfits—from Patrizia’s fluffy, furry hat to her blinding white, form-fitting dress to Paolo’s (Jared Leto) eye-watering lilac suit—are just flat-out fun to see. The array of hairstyles Patrizia adorns is also incredibly entertaining (and, combined with the soundtrack, are a great way to figure out what decade the movie is currently depicting).

Overall, though it can be unevenly paced and tries to bite off more than it can chew, “House of Gucci” is an enthralling, aesthetically pleasing romp through the more modern history of one of Italy’s most famous fashion brands.