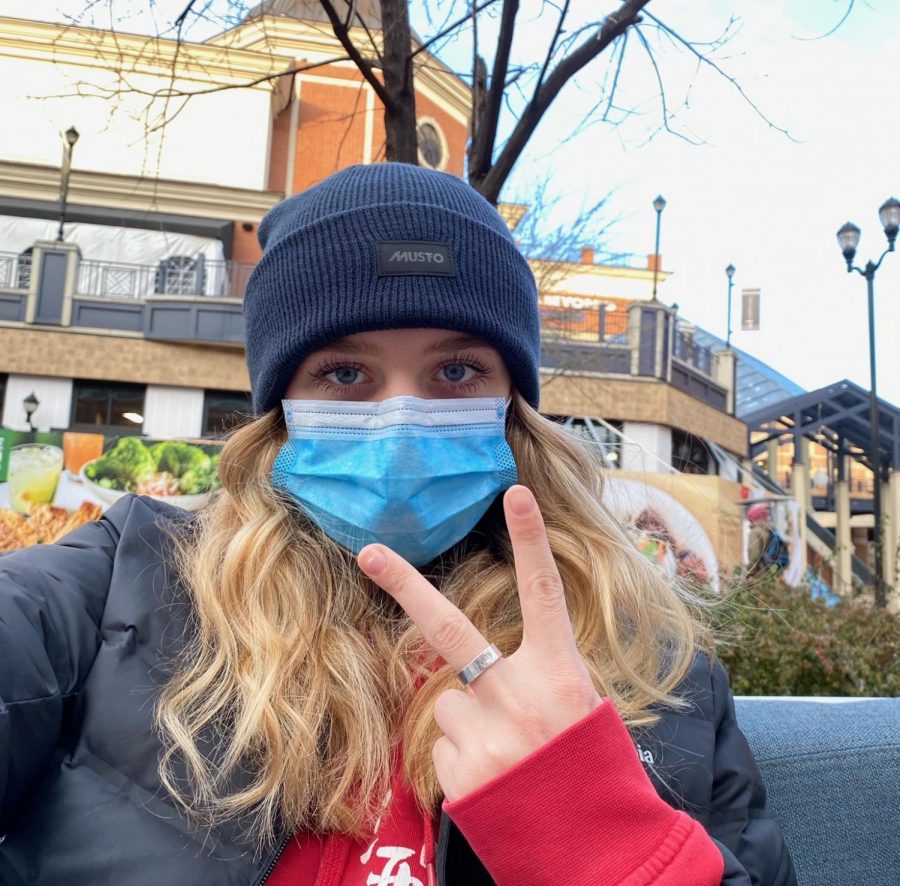 Gallery|2 Photos
Photo courtesy of Julia Garms
Junior Julia Garms had both strep and early signs of Covid-19 just a few days before New Years eve when her final results came back.

A single cough was all it took.

WJ senior Saoirse Tolbert and junior Julia Garms both started feeling sick back in late November and December when they noticed the classic symptoms of Covid-19 had started taking effect in their bodies. Unfortunately both students had been tested right before the holiday seasons, with Tolbert being tested around Thanksgiving and Garms around New Years eve. Both didn’t receive their results until the actual holidays.

With over 400,000 cases being confirmed in the US covid has taken a toll on people of all ages and has proven to be a real battle. Both of these students share their experiences and thoughts on how the virus both physically and mentally took over their lives, and acknowledge the strength it took to see the light at the end of the tunnel.

Like everyone else across the globe, Tolbert was living her day to day quarantine norm, trying her best at all times to stay safe. A couple days before Thanksgiving, she started to feel weak. It was so sudden and very fever-like, but she quickly learned that this virus is not the flu. It takes you over, it’s brutal and relentless.

“It was very weird, at first the symptoms were very fever-like but then it changed everyday. I felt like I had a different symptom all the time. A couple days after it started is when it really kicked in. I had chills, extremely high temperature, and then the next day I was nauseous, and it just continued on like that….towards the end [of her quarantine] I had a really bad stomach ache. It was absolutely terrible I could not move the entire day,” she said.

What makes Tolbert’s experience so unique was that instead of quarantining in her bedroom for two weeks, she quarantined with her entire household. After everyone in her family was tested multiple times she was still the only one infected.

“At first I thought my entire family got infected but it was just me. It was really weird. I literally lived with my mom and her boyfriend and neither of them got infected the entire time. They even got tested at the end and it still showed up negative. But I mean they did quarantine with me knowing that they could get it, but like I said they never got sick.”

That goes to show that covid is not only relentless but also unpredictable.

“Everyday was pretty much the same. I woke up and when school started I attempted to stay awake during class but I normally failed at that. Then I would eat some lunch and after class was over I took another nap and I couldn’t even keep my eyes open so I didn’t do homework for like three weeks. It was just a bad cycle on top of all the symptoms I had to deal with too,” she said.

Lack of appetite became one of Tolbert’s biggest battles during her time in quarantine. For a period of time she lost her sense of taste and smell and with constant nausea, it was hard to digest anything throughout the day.

“I did gain my appetite afterwards but I lost some weight during all of it. I must have lost six or seven pounds in just one week, and I don’t even weigh that much so it was a lot for me.”

Dealing with her health alone was hard enough, but catching up with school was a tremendous struggle in itself.

“They [Her teachers] were pretty understanding and they didn’t call on me for anything in class…and they told me it was ok if I catched up on my work later. Even though they were nice about it I don’t think they understood how hard it was to catch up because it literally took me the entire semester to finally catch up on everything,” she said. “It’s one thing catching up when you feel a little bit better but it’s another thing when you have double the assignments from the school you are doing currently and then the stuff you left behind. I can’t even imagine missing two days of school, imagine two weeks of school.”

Just being a regular teen in quarantine and fighting the physical battle of covid is hard enough, but having it attack your emotional side is an enduring struggle that Tolbert had to deal with.

“It’s hard to be motivated to do anything. And there’s even un-covid related stuff that I had to deal with so I couldn’t concentrate on anything especially school work. It was just a lot. I have a job too and they had to let me go and sometimes even after you’ve recovered from the virus some people can still test positive after three months so they wont let me go back until it’s negative and that hits hard.”

Like Tolbert, Garms received her results during the holidays. For her it was right on New Years Eve, which forced her to finish off the year alone in her bedroom. In efforts to try and figure out how she could have contracted the virus, the Maryland Department of Health-Covid Tracing center reached out to her, but it still remains a mystery to this day for they were unable to figure out the direct cause.

Like most covid survivors, she did experience the usual symptoms and was quarantined away from her family since she was also the only one infected in her household.

“I was coughing quite a bit, and I had shortness of breath all the time. I tried going on walks outside to get fresh air and I was panting for breath. It was a little worse for me since at the same time I also had strep throat. I was originally tested at the doctor for strep and it came back positive for that but I wasn’t corona positive until two days later,” Garms said.

Unlike Tolbert, her quarantine life was a bit more on the traditional side in terms of having very limited opportunities to leave her room except for showers and meals and had to strictly avoid her family at all times.

“I would usually lay in bed for a while and then get up to go to the bathroom, and my bathroom is not in my room so I would put on a K-95 to leave my room…then go to the kitchen and my mom would let me make food in there but I had to be careful with what I touched and not put anything back in the fridge…I also napped a lot. I was tired all the time since I didn’t have a lot of energy to do anything.”

When it came to Garms’s school life she used the covid-excuse letter that WJ provides and was able to excuse herself when she wasn’t feeling well or just couldn’t bring herself to do the same amount of work for that day.

“All of my teachers knew that I had covid and a lot of them were really understanding and they were like, ‘if you need anything it’s ok, if you can’t do something you’re excused’, and honestly it seemed like a blessing at some point,” she shared.

As supportive as her teachers were, her friends were an exception. With many stereotypes and myths ruling among peers and social media, the stigma amongst covid survivors is real and can be really detrimental.

“Right before I tested negative for covid and I wasn’t contagious for strep, I did have an outside bonfire with four friends and one of them is my neighbor and we were in the car together which was less than six feet apart, and she didn’t get infected. But when I told her that I got it she was not happy with me at all. She was really upset and angry and that was really hard since it wasn’t my fault.”

Even staying distanced among friends, or even family, can never give the certainty of being safe because the risk will always linger. This tends to be one of the many misconceptions about covid where so many people assume that if they are being safe then they can’t get it, and clearly that’s not true.

“Before I got it I thought I was being so careful and I’ll never get it, I’m invincible. I was being very careful and I always had my mask on. I took so many precautions since my dad is high risk so I was always washing my hands and I wasn’t really seeing people who would go out and do stuff all the time. I definitely didn’t think I would be the person to get it out of my friends because I stay home all the time, so once I got it I was in shock.”

The light at the end of the tunnel:

Amidst the struggles and chaos both of these students had, they still tried to find the positive outlook of it all. Whether it was reaching out to family or taking some time to take a breath and focus on their mental health, they were able to turn an impossible situation into a tolerable one.

“I just tried to distract myself and focus on my school work if I could. I took it easy and I did not stress about school if I didn’t have to. I was able to just take a break from everything and reboot. I wanted to do a lot more than I did, but I did stay in contact with my friends so that helped keep me sane,” Tolbert said.

Garms also took that time to focus on staying busy and taking care of her health so she could focus on the things she used to do during her recovery.

“To help with overcoming it mentally I talked to my parents and they said ‘this is not your fault’, my dad was also really understanding about the whole thing. I was really upset at the time and he just kept reassuring me that it wasn’t my fault. Hearing that from somebody else really helped me feel less guilty about getting it,” Garms said. “I was in shock when I found out that I was positive…but I wrote in my journal a lot which helped express what I was feeling. The anger, the sadness. I just tried to be positive. I talked to my friends everyday and sometimes they would check in on me…”

A few months have gone by since both students survived their illness. The fear that they both experienced was real but it made them stronger, and like the millions of survivors who have also faced this battle across the world, their stories are important ones to tell and share with the world on what it truly means to meet covid face to face.

“It’s real. A lot of people think they won’t get it, but you can. It’s not as far away as you think it is. Just know that you are around it and stay safe,” Garms said.

After reading their stories hopefully it has inspired some of you to be more aware of your actions and the people around you. Please, do your part and stay home, and hopefully one day we can all share moments together again. 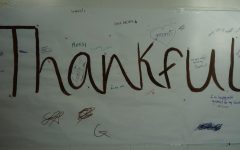 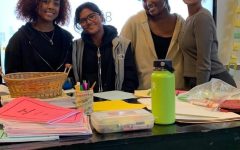 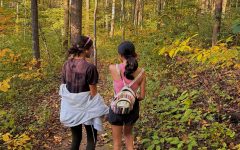 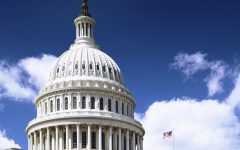 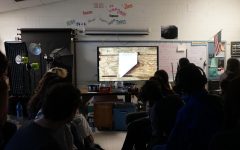 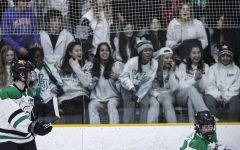 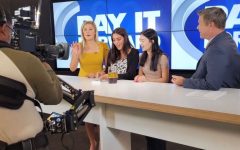 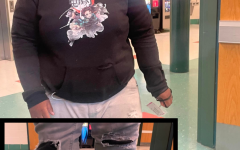 Up at bat: What kind of shoes do you wear at school? 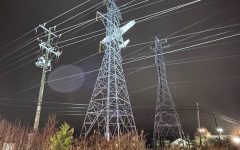 Donate to The Pitch
$150
$1000
Contributed
Our Goal
Submitting donation...