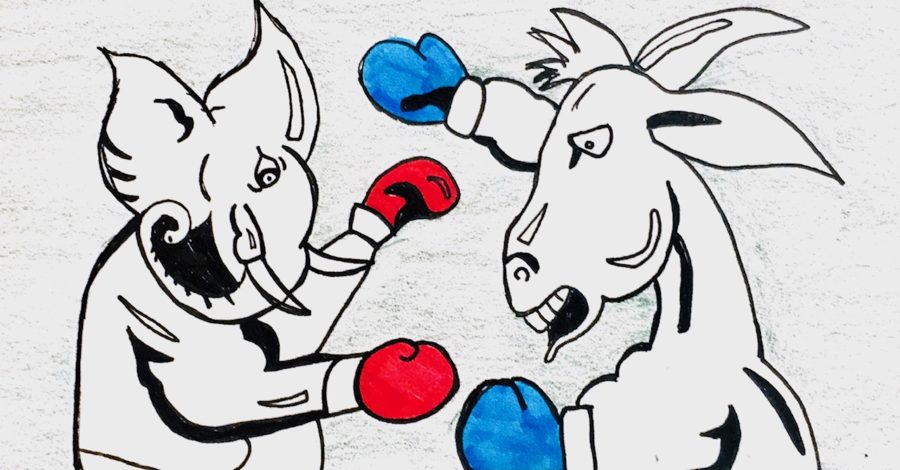 “I’ve chosen to stay true to myself”: The unfortunate truth behind the political minority at WJ

Most of you know what it’s like at WJ during lunch time. People scattered around and small groups of friends sitting on the hallway floors, while others are casually passing by. It’s easy enough to remember. I want you to picture this: A group of girls talking about who’s the better teacher, or their weekend plans. Nothing out of the ordinary.

Now imagine that one of those girls starts talking about politics after seeing something on an Instagram story. She passes around her phone to the rest of the girls in the group, and eventually they all chime into this intense conversation. It’s no secret that these girls all quickly agreed with one another; spewing out random, hateful comments like wildfire.

Does this sound familiar? Well…now picture another girl in the group, one who doesn’t agree. She’s a normal teen who is amid her group of supposed friends and wants to speak up, but she can’t. She remembers the last time she tried to speak up, a few days prior to this, the amount of hatred. So she hesitates, her face burns, but somehow she builds up the courage to join in on the conversation, providing a different point of view. After all they are her friends, aren’t they? This shouldn’t be a big deal.

Next thing she knows, the bell rings, her friends get up and leave her alone. Alone to digest the horrible words that were said to her within a span of 15 minutes, by the same people who called her their friend. She had experienced hostility like that before, but this time it was different. This time it was pure rage. As the hallways cleared, she sat still in the same spot hoping that she could forget the words that hurt her the most, words that were too hard to bear.

This is the story of junior Haley Smith who considers herself to be a conservative student. Conservative ideology is a known political minority at WJ. Smith has been ostracized by her peers ever since she started high school, always in fear of whatever she had to face next. And sadly, she isn’t alone.

Sophomore Lucas Milton has faced his own fair share of verbal harassment, especially in the world of social media, where about a year ago he briefly talked about being a Republican student.

“I’ve had people send me horrible comments, my own friends telling me I’m not ‘Hispanic enough,’ even though I’m a minority student, just because of my political beliefs. Sometimes I feel sorry for them and how ignorant they are at times, but it also kills me. It kills me to see the same students claim to be accepting of others, yet behind the scenes they tell me brutal stuff,” Milton said.

This is the sad and painful truth that most students never get to hear about. I was completely surprised by the amount of heartbreaking stories that I have heard from students who consider themselves to be right-wing. Political discrimination is just as unaceptable as any other act of intolerance and hate speech, such malevolence prevents open-minded discussion.

Most of the students who shared their stories told me that they kept their experiences of harassment a secret from their friends and family, in hopes that one day someone will decide to listen.

“The people who do know about my political views usually ask ‘why don’t you talk to your friends about it?’ People are so attached to their opinions that saying anything out of the ordinary is like setting a piece of paper on fire. It completely crumbles. As hard as it is to say, I honestly don’t feel comfortable enough to tell them about my hardships and experience, especially when the elections were going on. This year has been hard enough. If my friends don’t understand, then the chance of a total stranger understanding is one in a million,” senior Tim Robertson said.

The truth is that WJ isn’t as open and inviting as we think it is. The fact that most students are afraid, when it comes to uncomfortable situations and respecting all viewpoints no matter what the majority may be, should tell you everything you need to know.

It’s even fair to say experiences like these may never end, especially if we continue on this track with such verbal hatred and violence. With everything going on in the world today, small moments of kindness are needed more than ever. Taking the time to put all judgement aside and truly listen, you may be surprised at what you may learn.

I’m not writing this article to pity conservative students at WJ or those who fall in the minority of the political spectrum. My goal is to bring awareness to a situation that many people may not be aware of or have been a part of the hurt that students have faced. My goal is also to inspire readers who can relate to these stories, that thinking differently is okay even during one of the roughest years of our lives.

If there’s anything I learned this year, it’s that the small moments we share with others are more valuable than the hatred taken away. Everytime I have ever said anything remotely close to what people many consider to be a “right-wing” thing to say, I’ve been faced with comments such as “go kill yourself” or “people like you deserve to die.” At first I thought they were joking, until it started happening more frequently, even till this day.

The moments when we choose to listen and learn lift us up in indescribable ways, so how will we ever evolve as a society if we cannot approach people with different viewpoints without vehemence and anger? Choosing to not care about whether someone has something mean to say is up to you, which I know is easier said than done, believe me, but looking at the bright side and knowing that you’re not alone can be fulfilling in itself.

“Honestly, I don’t care. This year I had to learn how to not care what other people think about me all the time because then I would lose my mind. It’s hard to think that way when people keep nagging at you for something as simple as political beliefs especially in 2020 with elections…but I’ve chosen to stay true to myself. I want people to know that they aren’t alone. I’ve been called names, and a bunch of other detrimental stuff for what I believe in. No one should have to go through that type of pain. I hope that people will have more respect for one another, after going through a pandemic like this,” Smith said.

It is okay to disagree with other people. As a matter of fact it’s a wonderful thing to know that not everyone is like a clone thinking the same thing at all time. But don’t immediately rush to interrupt or say some nasty comment just for the sake of it. This goes to everyone, no matter what your affiliation is. Try to understand where they are coming from and choose your words carefully because you never know who you may be hurting whether intentionally or not. But most importantly, don’t just take it all in waiting to make your next argument, really listen.