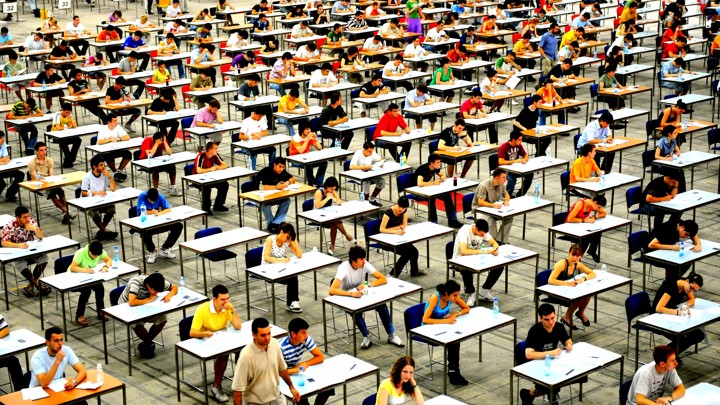 Photo courtesy of The iNews Network

Standardized testing should be eliminated

Standardized testing has been a long-used method of determining and assessing the intelligence of students. However, by prioritizing standardized testing like the ACT, SAT and AP tests as a measurement of intelligence, school systems aren’t cultivating intelligence, but are simply churning out identical copies of students, whose only goal in mind is to ensure their post-high-school academic future by satisfying the money-hungry and demanding testing corporations.

In school, we are taught that our minds are our greatest resources – that our own personal intellect and passions should be the driving force behind the search for a career and a meaningful life. Our educators never told us, “In order to have the best shot at getting into college and achieving your future aspirations, you’ll have to take an average of 8-10 standardized tests per year, starting in kindergarten, all the way through 12th grade.”

Throughout our pre-collegiate careers, we’re being told that our individuality and uniqueness is what defines us, yet schools prepare us for a multitude of crucial tests that ask us the same generic questions about topics that a large number of students have little to no interest in.

Other than to assess the efficiency and success of teachers and educators, standardized tests like the MAP R/M – a statewide test administered to test the mathematical and literary strength of students, the PARCC – another test similar to MAP tests, serve the same function as in-school curriculum based tests and assessments. Their similarity to in-classroom assessments raises the reason for their integration in schools across the state. Why burden students with more work, when they are being evaluated on the same basis in a normal classroom setting?

Last year, I was honored and privileged to spend over $1000 on SAT and ACT prep, sit for hours of practice tests, classes and ultimately hours of actual tests. I took the SAT three times and the ACT once. I received scores on both tests that would be considered mediocre for the colleges that I would be applying to. At the time I felt defeated, inferior and depressed. I felt as though I had failed myself. In the college application process, while test scores certainly aren’t everything, admissions boards will undoubtedly pick the student with a 1500 SAT score over the student with a 1300 SAT score, even if those two students are similar in their GPA, course rigor and essay/extracurricular strength. A good score can be the difference between an acceptance and a flat-out rejection. This reality is troubling for many students. Some students find that while they excel in school, they aren’t good test-takers. This means that for some, a three-hour test can be the barrier to their dream school – a barrier that shouldn’t exist in the first place.

This year was different. As a result of unprecedented circumstances regarding COVID-19, almost all colleges moved to a standardized test-optional setting for the incoming class of 2025. Students could choose whether or not they wanted to submit their test scores to be considered in their admissions process. The colleges pledged to be “holistic” in their review process, meaning that they would not place emphasis on, or favor a student who had submitted a test score, versus a student who had chosen to withhold their scores. If standardized tests aren’t eliminated or the movement towards eliminating standardized tests is not started, I believe that having colleges remain test-optional would be an excellent option. This gives students who aren’t devout test-takers or simply perform better in school, a fairer shot at being admitted to college.

Our intelligence shouldn’t be defined by a test. We should have the choice of whether or not we want to utilize these tests as a measurement of our accomplishments. It shouldn’t be forced or implemented. Moving to test-optional or eliminating tests altogether is a fairer and ethical alternative for students.